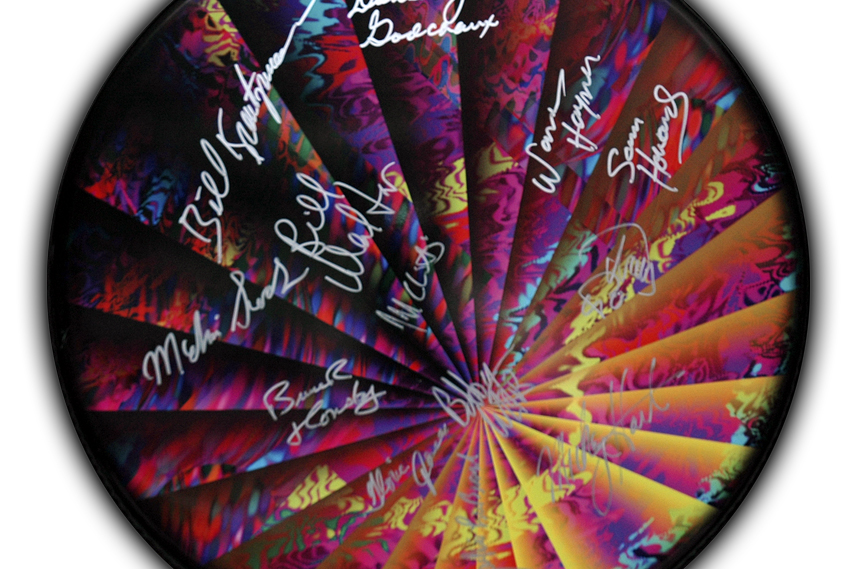 Between December 1 and December 10, 2005 DrumART.com auctioned off the the following celebrity custom bass drum heads - many of them designed and autographed by the artists themselves.

A very special head in so many ways! First, the artwork was created by BILL KREUTZMANN himself. It's his Electric Butterfly Dream design, and it's truly stunning.  Next, it's one of only two such heads in existance -- the other was used by Mickey Hart on The Dead's Wave That Flag summer tour in 2004. I believe it still adorns his drumkit today.

As if that weren't enough, this head was also "in attendance" and signed by many of the performers at the historic Comes a Time Jerry Garcia tribute show that took place at the Greek Theatre in Berkeley, CA in late-October. Autographs include:

The second "Dead Head" (sorry...I tried to resist...I really did!) and another equally special head to the Electric Butterfly Dream design. Again, the artwork was created by BILL KREUTZMANN himself. This one's called 1000 Mics, and it's also stunning. You really need to CHECK OUT HIS SITE for all the amazing artwork he's created. This head is also one of only two such heads in existance -- the other was used by Bill on The Dead's Wave That Flag summer tour in 2004, and it also still remains on his drumkit today.

As if that weren't enough, this head was also "in attendance" and signed by many of the performers at the historic Comes a Time Jerry Garcia tribute show that took place at the Greek Theatre in Berkeley, CA in late-October, 2005. Autographs include:

BETTER THAN EZRA are a group of class-acts from the Gulf Coast region who make some amazing music. Back in my cover-band days in the late 90's I pretty much demanded we play Desperately Wanting because it's just such an amazing song.

Anyway, we've been working with BTE for a while, and we were all very relieved to hear that the guys were allright after Katrina hit. We are also very glad to have them participating in these auctions. They've been doing tons of good work raising money at their shows, and they continue that effort here.

This head has been autographed in this enormous black Sharpie marker that we sent (sorry, guys, it was all we had!), but luckily it looks great given the design of the head.

Bring the Music Back Charity Head

Bring the Music Back:

There are actually two of these remarkable heads available. The design was created by our artists specifically to support these auctions, and we were able to partner with the WEST COAST DRUM CENTER on their 2005 Celebrity Golf Tournament to have the following musicians and celebs autograph these heads:

Huge thanks go out to the celebs and (especially) to Andrew and the crew at the WEST COAST DRUM CENTER!

Are you kidding me?! These are amazing heads signed by not one, not two, not even three... They're autographed by many titans of the drum riser!

Okay, so maybe the guys from SEETHER had a bit too much fun autographing this head, but you've got to appreciate the authenticity! This head is straight of John Humphrey's kit and onto yours. Literally.

That's right, we replaced this head with a new one, so you're getting the actual head off Seether's drums. If you've seen them live in the past year or so, you've seen this very head. Now you can own it, along with the autographs of everyone in the band.

IN FLAMES is a very talented metal band from Germany. This head was created for Ozzfest 2005. They were the first Direct Management band we worked with, and it is through that relationship that we are able to offer not only the In Flames head for auction, but also Chimaira, Caliban, Moonspell and Lacuna Coil. For that we are thankful!

More scary than a night in the Amityville Horror house? Yep. More disturbing to parents everywhere than Marilyn Manson? Probably. Back in my day it was Maiden, Metallica and Slayer. Now it's DIMMU BORGIR.

Whatever -- all I know is that these guys can PLAY. Their drummer is just rediculous. Double kicks you need a radar gun to clock. Black metal never sounded so...black.

Many thanks to Makka at Direct Management for making this head (as well as the heads for In Flames, Chimaira, Caliban, Moonspell and Lacuna Coil) possible for these auctions!

Okay, here it is -- the way I know I love this band without even hearing them: to get into their site, you have to either choose the Flash version or the HTML version. For the Flash site, version 8 is required. A mustache is optional. :)

While that may be funny, Chimaira is certainly no joke. Brutally heavy and fiercely accurate, this is music you could break your own neck listening to. Yes, that's a head-banging reference.

Chimaira's drummer, Kevin Talley, is featured in this month's Modern Drummer magazine -- and for good reason! The man is an amazingly talented player.

This head is another Direct Management hookup -- and here's your chance to own it!

Formed in 1997 (under the name Never Again) Caliban signed to Lifeforce Records after recording a two song promo tape. The release of their self-titled EP in the summer of 1998 was the start of a co-operation which was to lay the foundation of Caliban's incredible success. Countless tours all over Europe including a few support gigs for bands like Morning Again, Earth Crisis and Cro-Mags strengthened their reputation and got them an ever increasing army of Caliban "apostles". Their full-length debut album "A Small Boy And A Grey Heaven" (1999) finally opened the door to fame and became a European metal-core classic. Even then Caliban knew how to combine Slayer-esque, precise metal guitars with emotional hardcore shouting, leaving their own, distinct mark on that sound.

Initially seen as mix of Slayer, Poison the Well and Hatebreed by the critics Caliban didn't jump on the metal-core bandwagon just recently but rather lead the way representing that genre at home and internationally.

This head features an interesting set of "autographs" from the Portugese goth-metal band,MOONSPELL. "Autographs" is in quotes because these signatures were put on paper, scanned and e-mailed to us for use on the head. There's nothing else like it -- this is a one-of-a-kind head.

MOONSPELL affirms poetry and art as accomplices to their music by combining the age-old tradition of storytelling with the equally ancient talent of true musicianship. While MOONSPELL's music is called gothic and metal, their unconventional combination transcends both and embraces neither, giving them an enchanting aura. With The Antidote, MOONSPELL once again weaves captivating stories with new characters in their imaginary universe, determined to give their audiences something to embody.

To be honest, we don't know all that much about LACUNA COIL. What we do know is that they're a talented Italian goth-rock band with an impossibly beautiful female vocalist named Christina Scabbia. Thanks to our friends at Direct Management, we were given permission to recreate their head for this auction, and we're hoping there are legions of Lacuna Coil fans just waiting for the opportunity to own this head!

The effort raised over $10,000 for the MR. HOLLAND'S OPUS FOUNDATION to help put musical instruments back into the hands of music students displaced by Hurricane Katrina.

We are proud to have been able to help in the effort to help bring the music back to New Orleans and the Gulf Coast region.

jpdancer - NC, United States
I purchased a 24" removable logo and it came perfect, easy to do and looks great. I would recommend this site to anyone, my order came just as ordered and I also got bumper stickers made and they sent extra. great quality
Eric - PA, United States
Everything went well; from the shopping on line to the shipping. The product is everything that I expected!
Nathan J. - AL, United States
The only hard part is deciding what goes on the front whether you pick form the broad selection of designs in their arsenal or create our own. I had my own design and as part of a band we all agreed it couldn't have turned out better as it's not just for the drummer but defines the band as a whole. Will definitely be back to purchase bumper stickers and any of my custom drum needs.

Register to receive the latest news, sale information and promotional codes from DrumART.com!