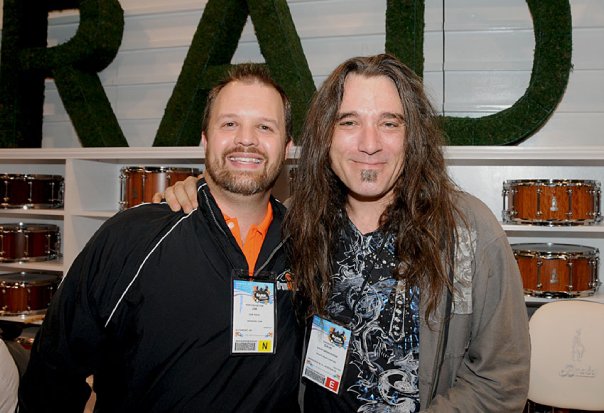 We're back from The 2012 NAMM Show, and what an amazing trip it was! This year's show featured some cool drums, amazing craftsmanship, bad ideas and what seemed to be many more people in attendance than in recent years.

Trends were not quite as easy to recognize this year -- there was a lot of uniformity and few truly innovative concepts or products to be found among the big players' booths.  There was a definite "if you're from China, you're a leper" vibe going on throughout the show, though.  It was rare to see *anyone* in any of the Chinese booths that are popping up more and more.  Since we first attended NAMM nearly 10 years ago, their number has grown exponentially.

This attitude is hard to understand since so many of the instruments made in the music industry's furious race to the bottom are from overseas, particularly China.  Clearly nobody wants to be seen as outsourcing even though all of the big companies and most of the small companies are doing it.  My guess is that there are a lot of meetings going on after show hours and outside the convention center.

Notable exceptions could be found in the smaller booths and peripheral aisles.  The most notable was a new (to us) builder called JON CROSS CUSTOM DRUMS.  These drums combine an outrageous amount of skill, creativity and craftsmanship with exotic woods and stunning finishes to create the most remarkable snare drums and full kits we've ever seen.  In addition, the BRADY booth was a standout with their breathtaking ultra-limited-edition "Walkabout" series drums.  DYNAMICX DRUMS had a good showing with some amazing exotic snares and a beautifully-finished full kit.  Dynamicx offers the benefits of precision automated construction processes with time-honored hand-made practices and flawless finishes.  The proof is in the pudding.  Also notable is C&C DRUMS' new Player Date series which is trying to buck the offshore trend by making their own series of affordable (and great-sounding) production drums in the USA.  Unlike C&C's custom snares and kits, Player Date drums will be available in drum shops throughout the US and internationally at a very nice price.

As usual, DrumART provided the custom bass drums for the LUDWIG booth which looked amazing as always.  We also helped out our friend Ed Mendel and his new venture called ANCIENT TREE DRUMS with a very cool drumhead that matched the kit it was on quite well.  Be sure to look for them in the pictorials!

As great as the show was, it's good to be home and getting back to the business at hand.  We're more focused, energized and motivated than ever -- all things that will keep us on top of our game until The 2013 NAMM Show rolls around next year!

jpdancer - NC, United States
I purchased a 24" removable logo and it came perfect, easy to do and looks great. I would recommend this site to anyone, my order came just as ordered and I also got bumper stickers made and they sent extra. great quality
Eric - PA, United States
Everything went well; from the shopping on line to the shipping. The product is everything that I expected!
Nathan J. - AL, United States
The only hard part is deciding what goes on the front whether you pick form the broad selection of designs in their arsenal or create our own. I had my own design and as part of a band we all agreed it couldn't have turned out better as it's not just for the drummer but defines the band as a whole. Will definitely be back to purchase bumper stickers and any of my custom drum needs.

Register to receive the latest news, sale information and promotional codes from DrumART.com!